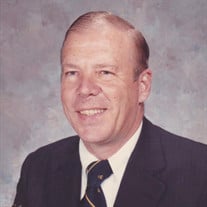 Thad Owings, a native of York, PA passed away peacefully after a lengthy illness on May 26, 2017. He was born in 1930 on Christmas Eve along with his identical twin Henry. He attended York Catholic High School and eventually graduated from Campion, a Jesuit boarding school in Prairie du Chien, Wisconsin. After high school, he attended Georgetown University, but left to enlist in the Air Force as a fighter pilot when the Korean war broke out. Following his military service, he returned to York and joined the family business, June Bug Feeds. He fell in love and married his lifelong partner Ann McCormick Owings in 1962. He worked in the animal feed business in Pennsylvania and in Paris, Texas prior to moving to Houston, Texas. Thad owned and operated Gulf Coast Feeds in Sugarland, Texas. He retired after selling the business in 1981. As a young man, Thad enjoyed playing competitive ice hockey, football and swimming. Later, he became as an avid golfer and was a member of Pine Forest Country Club. Retirement offered Thad free time which he devoted to the American Cancer Society and working with Hospice patients. He was passionate about collecting early American antiques and loved gardening and was especially fond of hibiscus plants. In his later years, Thad enjoyed spending time at his home in Twin Lakes where he and Ann lived for more than 27 years. Thad was most proud of his military service and wore a hat with his squadron number on it daily. He is survived by his loving wife, Ann Owings after all most 55 years of marriage; 4 sisters, Ann Halloran of Houston, Texas, Susan Kissel of Birmingham Alabama, Connie Hallinan of Vero Beach, Florida, and Rosa Eshelman of Lancaster, Pennsylvania; his twin brother Henry Owings of Houston, Texas; 3 children, Mimi Becker of Tallahassee, Florida, Thad Owings of Atlanta, Georgia, and Henry Owings of Houston, Texas and 9 grandchildren. Thad was preceded in death by his father Thaddeus C. Owings and his mother Mae Miller Owings of York Pennsylvania, his sister Mary Rogers Owings of Hot Springs Arkansas, and his granddaughter Katherine Elizabeth Owings of Atlanta, Georgia. The Owings family will be present to receive friends Wednesday, May 31, 2017 from 6:00 PM until 8:00 PM with a Holy Rosary being recited at 7:00 PM at Dettling Funeral Home, 14094 Memorial Dr., Houston, TX 77079. A Funeral Mass will be held at St. John Vianney Catholic Church, 625 Nottingham Oaks Trail, Houston, TX 77079, at 10:30 am on Thursday, June 1, 2017. In lieu of flowers, please consider contributions in Thad’s memory to the American Cancer Society or the Continuing the Vision Capital Campaign at St. John Vianney.

Thad Owings, a native of York, PA passed away peacefully after a lengthy illness on May 26, 2017. He was born in 1930 on Christmas Eve along with his identical twin Henry. He attended York Catholic High School and eventually graduated from... View Obituary & Service Information

The family of Thaddeus C. Owings Jr. created this Life Tributes page to make it easy to share your memories.

Thad Owings, a native of York, PA passed away peacefully after...