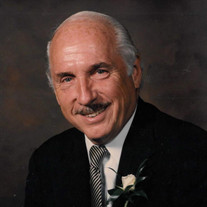 Thomas H. Fawell, age 90, died peacefully in his Houston, Texas home on June 28, 2019, surrounded by his wife and children. Born March 25, 1929, in West Chicago, IL to parents Walter and Mildred Fawell, he grew up in a very competitive atmosphere with three brothers, all devoted to one another and to their beloved Chicago White Sox. Even as a child, he was recognized as a gifted artist by his teachers, who urged him to “draw” rather than write his assignments. After high school, he attended the Chicago Art Institute and later graduated with honors from the Pratt Institute in Brooklyn, New York. While at Pratt, he was admitted to the prestigious Society of Illustrators, the only student to be accorded such an honor. At his 1953 graduation, in a blind vote of the Pratt Art Institute faculty, he was awarded the outstanding artist honors in every category then available. He married his wife Sharon during Christmas break, on December 23, 1950 and remained united to her in marriage until his death. After graduation and in the years following, he repeatedly turned down lucrative offers from New York’s most prestigious Madison Avenue advertising firms, preferring instead to raise a family in the comparative stability of the Midwest. His career was long, fulfilling and varied. He is best known for his trademark paintings of trains, commissioned by General Motors’ Electro-Motive Division, that are now coveted by art collectors and train buffs alike. These much sought-after works of art were featured as the center spread in Fortune Magazine for 25 years. He is equally well known for his art and advertising services created for the major Christian publishers of the day, including Scripture Press, Zondervan, Thomas Nelson, Moody Press and others. It was at Moody that he was engaged to design a book cover and collateral material promoting the biography of Johnny Cash. It was during this time that he formed a deep and abiding friendship with Mr. Cash and his wife June Carter. Tom Fawell was also a man committed to this community, serving as School Board President of the primary grades in his home of West Chicago, a committed Sunday School teacher, founder and leader of a Christian boys club and later as the Chairman and Director of the DuPage County Airport Authority. He is survived by his loving wife Sharon and children Thomas, William, Terry, Joani and Douglas. He is reunited with his loving daughter Jennifer who preceded him in death in 1992. He is also survived by his daughters-in-law Tess Fawell and Amy Fawell, his son-in-law Kyle Scaff, and his grandchildren Bart Nebergall, Nathan Nerbergall, Thomas Scaff, Luke Scaff, Caleb Fawell, Jack Fawell and Ruby Fawell. Visitation services will be held at the Dettling Funeral Home at 14094 Memorial Drive, Houston TX at 6:00 PM on Monday, July 8. A private service for the family will be held the following morning. A graveside service will be held at the Glen Oak Cemetery in West Chicago IL on Friday, July 12. In lieu of flowers, please consider a contribution to Samaritan’s Purse at https://www.samaritanspurse.org/ourministry/christiancharity/?utm_source=Bing&utm_medium=cpc&utm_campaign=m_YYCRF19V&utm_content=christiancharlp&msclkid=853fe0c594d01b960eebbdd22a726bb7&utm_term=franklin%20graham%20ministry.

Thomas H. Fawell, age 90, died peacefully in his Houston, Texas home on June 28, 2019, surrounded by his wife and children. Born March 25, 1929, in West Chicago, IL to parents Walter and Mildred Fawell, he grew up in a very competitive atmosphere... View Obituary & Service Information

The family of Thomas H. Fawell created this Life Tributes page to make it easy to share your memories.

Send flowers to the Fawell family.