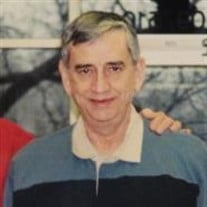 Thomas Edward Hargis, 73, passed away on December 19 after a prolonged illness. A native of Texas, he and his family moved to Shreveport, Louisiana when he was a young boy. While at Byrd High School Thomas excelled in track and field and won various state awards. He not only excelled in sports but was an Eagle Scout and a talented musician. His love of music was only surpassed by the love he had for his family. Thomas attended LSU where he was a Phi Delta Theta. He later returned to Texas and graduated from Texas Wesleyan University. He worked in Houston and also at NASA in Clear Lake as a Geophysicist. He is preceded in death by his mother Helen K. Hargis of New Orleans and his father Alvin V. Hargis of Lockport, La. He is survived by his son Rev. Thomas Edward Hargis, Jr. of Ohio; his wife Dr. Katie Joyce Hargis and his grandchildren Timothy James, Kathryn Joan, and Madeline Sarah ; his son William Clement Hargis of Austin, TX.; his wife Leanna Kay Hargis and grandchildren Ryker Lee and Kye Gabriel; his brother John Alvin Hargis of Euless, TX; his wife Kathy; his sister Helen (Lyn) Hargis of Cat Spring, TX ( formerly from Houston); nieces and nephews and cousins in Louisiana and in Texas including John Alois Graml of Houston. Our family owes a great deal of gratitude to John Alois and his family for their help during Thomas’s prolonged illness. We are forever in their debt. The family will be receiving friends at Dettling Funeral Home, 14094 Memorial Dr., Houston, TX 77079, Tuesday, December 29, 2015 from 6:30 PM until 8:00 PM. The Holy Rosary will be recited at 7:00 PM. The Funeral Mass will be held at Holy Family Catholic Church, 1510 Fifth, St., Missouri City, TX 77489 on Wednesday, December 30, 2015 at 10:30 AM. A reception will follow Holy Mass on the church grounds. Interment will follow at Memorial Oaks Cemetery in Houston.

Thomas Edward Hargis, 73, passed away on December 19 after a prolonged illness. A native of Texas, he and his family moved to Shreveport, Louisiana when he was a young boy. While at Byrd High School Thomas excelled in track and field... View Obituary & Service Information

The family of Thomas Edward Hargis Sr created this Life Tributes page to make it easy to share your memories.

Send flowers to the Hargis family.