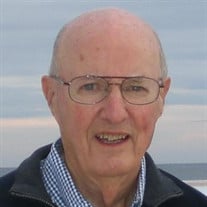 Thomas (Tom) Maurice Laughlin died peacefully at home surrounded by his family on July 27, 2016 after a courageous battle with Alzheimer’s. He was born October 6, 1933 in Des Moines Iowa, to Maurice and Ivey Laughlin. After graduating from Dowling High school in Des Moines, he attended the University of Iowa and graduated in 1956 with a Bachelor’s degree in Marketing. In 1953, he met the love of his life, Mary Frances DeHeck. After marrying in 1957 at St. Augustine’s Catholic Church in Des Moines, Iowa, they moved to Honolulu, Hawaii where Tom was stationed with the Army as a 1st Lieutenant. In 1958, they returned to Des Moines with their newly born daughter Elizabeth (Liz) and Tom began working for Continental Oil Co. (Conoco), beginning his 35 year career in the oil industry. His work took him and his family throughout the Midwest to Davenport and Waterloo, Iowa; Omaha, Nebraska; and Minneapolis, Minnesota before moving to Houston in 1970. By then, he and Mary had four children, Elizabeth (Liz), Richard (Rick) and twins Joan and Jill. Tom was dedicated to his work and proud to work for Conoco for 25 years and then British Petroleum for 10. During his time with Conoco, he held various management positions throughout the Midwest, Houston, TX and Costa Mesa, CA. Tom began working for British Petroleum North America in Houston, Texas where he served as Vice President and then President. In 1990, he was transferred to London, England as Manager of Fuels for BP Marine where he managed twelve international offices. Living abroad and traveling around the UK and parts of Europe was a rich experience that Tom and Mary cherished. In 1993, they moved back to Houston and Tom retired. He and Mary spent the next several years playing lots of golf and traveling to different parts of the US to visit their children, grandchildren and extended family. Tom was known for his dry wit, small acts of kindness and gift of gab. He developed close and lasting relationships with many colleagues and friends. His smile and laughter were contagious and he was always there to lend a helping hand or provide sound advice, solicited or not! He will be greatly missed by those who had the pleasure of knowing and loving him. Tom is preceded in death by his parents Maurice and Ivey Laughlin, brothers, Richard and Michael Laughlin, and daughter Jill Laughlin. He is survived by his devoted and loving wife of 59 years, Mary Laughlin, daughter Elizabeth D’Amico and husband Dean D’Amico, son Rick Laughlin, MD and wife Tracie Laughlin, and daughter Joan Laughlin and husband Stuart Smith. He was so very proud of his five grandchildren – Sam D’Amico and Sarah D’Amico of Austin,Texas and Joe Laughlin, Mike Laughlin and Dan Laughlin of Dayton,Ohio. The Laughlin family will be present to receive friends Wednesday, August 3, 2016 from 6:00 PM until 8:00 PM with a Vigil for the Deceased beginning at 7:00 PM at Dettling Funeral Home, 14094 Memorial Dr., Houston, TX 77079. The Funeral Mass will commence Thursday, August 4, 2016 at 10:30 AM at St. John Vianney Catholic Church, 625 Nottingham Oaks Trail, Houston, TX 77079. Mr. Laughlin will be laid to rest in Forest Park Westheimer Cemetery following Holy Mass. While you may be gone, your presence and memories will last forever! A special thank you to his caregiver Ms. Toni Danci and VITAS Home Hospice who offered their support, kindness and guidance to Tom and his family. In lieu of flowers, please consider making a donation in Tom’s name to the Alzheimer’s Association or St. John Vianney Catholic Church.

Thomas (Tom) Maurice Laughlin died peacefully at home surrounded by his family on July 27, 2016 after a courageous battle with Alzheimer&#8217;s. He was born October 6, 1933 in Des Moines Iowa, to Maurice and Ivey Laughlin. After graduating... View Obituary & Service Information

The family of Thomas Maurice Laughlin created this Life Tributes page to make it easy to share your memories.

Send flowers to the Laughlin family.