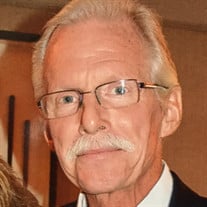 Thomas Joseph McNeff, formerly of Lima, Ohio died peacefully in Houston, Texas on Thursday, December 16, 2016 following a short illness. Tom was born on June 16, 1947 to Raymond (Joe) and Evelyn (Lisk) McNeff, who preceded him in death. Tom was a graduate of Lima Central Catholic High School and in 1993, was inducted into the LCC Hall of Fame for professional achievement. After high school, Tom went to the Ohio State Branch Campus in Lima and was soon drafted into the US Army, where he served in combat in Viet Nam. After military service, he received a degree in Graphic Design from the Art Academy of Cincinnati. He then worked in Phoenix, AZ, Milwaukee, WI and eventually settled in Houston, TX where he finished his design career with Herring Design. Tom did some of his work for well-known names but his proudest moment came when he was requested to do a drawing of the main building (Golden Dome) for the University of Notre Dame. Tom is survived by his wife Lynn (Fox) of Houston, his daughters Kelly(Cade) Collins of Fairfield, ILL, Colleen(Michael) LaPaglia of Houston, a twin brother, Michael J. McNeff of Ft. Wayne, IN, and sister Katie (Sid) Hooks of Lima, OH. Tom is also survived by two granddaughters, Brooklyn and Harper. The McNeff family will be present to receive friends Tuesday, December 27, 2016 from 6:00 PM until 8:00 PM with a Vigil Service beginning at 7 PM at Dettling Funeral Home, 14094 Memorial Drive, Houston, TX 77079. The Funeral Mass will commence Wednesday, December 28, 2016 at 10:30 AM at St John Vianney Catholic Church, 625 Nottingham Oaks Trail, Houston, TX 77079. A reception will follow Holy Mass on the church campus. Tom will be laid to rest following the reception at 1:30 PM at Memorial Oaks Cemetery via motorized cortege. In addition to the customary remembrances please consider contributions in Tom's memory to the Priests of the Sacred Heart at www.sacredheartusa.org , Veterans Food Pantry in Limo, OH at Lima Community Charitable Foundation, P.O. Box 5096, Limo, OH 45802, Lima Rescue Mission at www.limamission.org

The family of Thomas Joseph McNeff created this Life Tributes page to make it easy to share your memories.

Send flowers to the McNeff family.