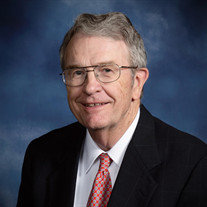 Thomas William White died peacefully at home on November 24, 2019. The son of Harry Raymond White and Mary Alice O’Neill, he was a Cincinnati native who grew up in Chattanooga, Tennessee. In 2013 he was proud to become a Quinq, a fifty-year alumnus of Vanderbilt University, where he had played on the baseball team. After college, he spent a year in Brazil as a Fulbright Scholar, studying 19th century Brazilian history. He earned a Masters in Latin American Studies at Stanford University, where he met his wife of fifty-two years, Monica Stephens. Tom served in U.S. Army Intelligence in Vietnam, 1967-1968, for which he was awarded a Bronze Star Medal. Tom’s career spanned various industries: banking, savings and loan, and oil. He was a member of the Houston Treasury Management Association and was President of the National Petroleum Credit Association (formerly SWPCA) in 1998-1999. His colleagues at his final job, at Chevron, made it his most enjoyable. For over twenty years Tom served on the Board of the Stanford Club of Houston. He was active in the Larry Dierker SABR Chapter, often winning the monthly meetings’ trivia contests. Along with being an avid baseball fan (Reds, Rangers, Astros, depending on where he lived), Tom also followed NASA’s space program with great interest. With his wife he participated in the Honeymooners at Heart at St. John Vianney Catholic Church. Tom is survived by his wife, Monica; two sisters, Sister Roseanne White, OSU, and Mary Ellen Operchal (Tom); four children: Christopher (Cynthia), Irene, Harry (Rebecca), and Thomas Jr. (Leena); and ten grandchildren: Emma (Adam) and her mother, Gisela; Thomas, Jude, and Eleanor; Samuel, Irene, Lillian Marcella, and Harper; and Celeste and Lucas. The White family will be present to receive friends Sunday, December 1, 2019 from 2:00 PM until 4:00 PM with a Vigil/Rosary Service beginning at 3:00 PM at Dettling Funeral Home, 14094 Memorial Dr., Houston, TX 77079. The Funeral Mass will commence Monday, December 2, 2019 at 10:30 AM at St. John Vianney Catholic Church, 625 Nottingham Oaks Trail, Houston, TX 77079. A reception will follow Holy Mass on the church campus. Mr. White will be laid to rest in VA Houston National Cemetery on Tuesday, December 3, 2019 at 10:15 AM. In lieu of flowers, please send donations to St. John Vianney Church, 625 Nottingham Oaks Trail, Houston, TX 77079 or to Houston Hospice, Member of the Texas Medical Center, 1905 Holcombe Blvd, Houston Texas 77030.

Thomas William White died peacefully at home on November 24, 2019. The son of Harry Raymond White and Mary Alice O&#8217;Neill, he was a Cincinnati native who grew up in Chattanooga, Tennessee. In 2013 he was proud to become a Quinq, a fifty-year... View Obituary & Service Information

The family of Thomas William White created this Life Tributes page to make it easy to share your memories.

Send flowers to the White family.