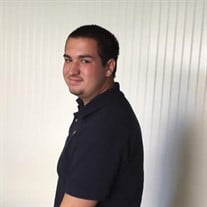 Tomas Juan Amieva Mejia was born on January 2, 2002 in Houston, Texas. He was the healthiest looking boy in the NICU and the nurses showed him off like their best work as a stream of family came to visit and welcome him into their fold. In that family’s embrace, he grew into a bright light with a laugh like Woody Woodpecker and the best hugs, a playful sense of humor, the sweetest smile, and a lifelong love of music. He would tell you his favorite artists included rappers such as Kevin Gates and YoungBoy Never Broke Again, but he harbored a secret lifelong love for Carly Simon’s 1972 hit “You’re So Vain” as well as classics by such varied artists as the Dixie Chicks, Carlos Vives, Frank Sinatra, and Juanes. Tomas excelled in school, friendship, and art of all forms even as life dealt him the double blow of mental illness and drug addiction. No one battled that illness with more determination or more humor than he. Many people helped him along the way, most particularly, his mother Angela, father Pedro and sister Lia. He also had the love and company of his extended family, his recovery and treatment families, and the therapists, counsellors, sponsors, teachers and doctors who fought so hard to help him on this all too difficult path. All are grieving their sudden and grievous loss and praying that he has found rest and peace as he was murdered on March 1, 2020 in Houston, Texas. Tomas is survived by his mother Angela Mejia, father Pedro Amieva, his sister Lia, grandparents Roberto and Monica Mejia and uncle Juan Mejia and his family of Corpus Christi, aunts Ana Mejia-Dietche and Beatriz Mejia and their families in Austin, Oregon, and Georgia, grandparents Esther and Pedro in Spain, aunts and uncles Ami, Tomas and Aurora in Spain, and a caring family in Colombia and Spain. Aside from blood relatives, he was blessed to have an extended family of choice and is survived by numerous friends who loved him as a brother and as a son. He is also survived by two spoiled dogs he tried very hard to turn into his backup dancers and they know they will never receive belly rubs better than the ones he gave them. All will be comforted by memories of the sweetest, goofiest, most loving boy they could have ever hoped to meet. Visitation will be from 6:00 PM to 8:00 PM at Dettling Funeral Home on Saturday, March 7th and a memorial service will be held at the same location at 7:00 pm.

Tomas Juan Amieva Mejia was born on January 2, 2002 in Houston, Texas. He was the healthiest looking boy in the NICU and the nurses showed him off like their best work as a stream of family came to visit and welcome him into their fold. In that... View Obituary & Service Information

The family of Tomas Juan Amieva Mejia created this Life Tributes page to make it easy to share your memories.