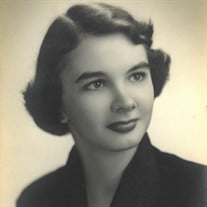 Verdalee McCullough Pierce (“Vee”) died peacefully surrounded by her family on Sunday the 18th of August 2019 in Houston, at the age of 91. She was a much beloved wife, mother, grandmother, great grandmother and friend and will be greatly missed by all who had the joy of knowing her. Vee was born on the 30th of October 1927, in New Orleans to John Benjamin McCullough and Myrtle Lacoume McCullough. Vee moved to Houston as an infant with her parents. She graduated from St. Agnes Academy in 1944 and from Rice University in 1948 with a Bachelor of Arts degree in English. After graduation from Rice, Vee became the first lay teacher at St. Agnes Academy. Vee enjoyed teaching and established the St. Agnes Drama Club, which she led to winning a statewide drama competition. After teaching for several years, Vee left St. Agnes to join Hardware Mutual Insurance Company. It was at Hardware Mutual that she met her future husband, David Pierce, whom she married in 1954. They subsequently had three children, and were later blessed with five grandchildren and seven great grandchildren. Ever the supportive wife, Vee followed David through nine transfers with her husband’s employer, Prudential Insurance Company, including Houston, Ft. Worth, Dallas, Kansas City, New Orleans, New Jersey and California. Vee was a remarkable woman with a strong spirit and with a great sense of vitality, warmth, community involvement and humor. She had many passions and interests, including reading, travel and playing bridge, but Vee's greatest love of all was her family. She and David enjoyed travel, and made dozens of trips to Europe, Mexico, Canada, the Caribbean and throughout the US. After David’s retirement in 1992, they returned to Houston where they have lived in close proximity to their family ever since. Vee is survived by her devoted husband of 65 years, David; son, Steve Pierce; son, Andy Pierce (Sandie); daughter, Jennifer Pierce; granddaughter, Megan Rosenbaum (Randy); grandson Matt Pierce (Candice); grandson Michael Pierce; granddaughter Machaela Pierce; grandson Hamilton Pierce; seven great grandchildren; two nieces and a nephew. The Pierce family will be present to receive friends Thursday, August 22, 2019 from 6:00 PM until 8:00 PM with a Rosary Service at 7:00 PM at Dettling Funeral Home, 14094 Memorial Dr., Houston, TX 77079. The Funeral Mass will be celebrated Friday, August 23, 2019 at 10:30 AM at St. John Vianney Catholic Church, 625 Nottingham Oaks Trail, Houston, TX 77079. Immediately following, all are invited to greet the family at the reception in Saint Jude Hall at St. John Vianney Catholic Church. Vee will be laid to rest in a private family gathering following the reception. In lieu of customary remembrances, memorial contributions in Vee’s name can be made to the Alzheimer’s Association, Rice University or a charity of your choice.

Verdalee McCullough Pierce (&#8220;Vee&#8221;) died peacefully surrounded by her family on Sunday the 18th of August 2019 in Houston, at the age of 91. She was a much beloved wife, mother, grandmother, great grandmother and friend and will be... View Obituary & Service Information

The family of Verdalee McCullough Pierce created this Life Tributes page to make it easy to share your memories.

Send flowers to the Pierce family.