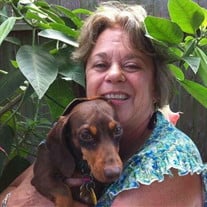 Victoria (Vicki) Lynn Rehberg passed away on January 7, 2018 at the age of 65. Born in San Antonio, Texas on March 29, 1952 to Gus and Pauline Rehberg, Victoria is survived by her son, Matthew Rehberg (grandsons Bentley and Maysen), sisters Cynthia Rehberg of San Antonio and Laura Hogue (Marshall) of Houston. Nephews Brandon Hogue, Tyler Hogue and Nicholas Rehberg. She is preceded in death by her beloved mother, Pauline, and her beloved dog, Buddy. Vicki attended St. Peter’s Prince of the Apostles elementary school and graduated from Incarnate Word High School in 1970. She then attended San Antonio College and Texas State University in San Marcos (aka Southwest Texas University). She worked at various oil and gas companies in San Antonio, Tesoro Petroleum being the longest, then transferred to Houston to work for Newfield Exploration Company in 2003 where she later retired in 2012. She made her home in Cypress, and joined the Parish of Christ the Redeemer Catholic Church. Vicki was the original “flower child” and seemed to always wear some image of the 70’s peace sign in a necklace, pin, or ring, and in her home she was surrounded by peace signs, angels, and pink flamingos. That image truly was her rule of life as she was a very peaceful, and quirky, individual. Vicki was very involved at CtR serving as a Religious Education catechist, Extraordinary Minister of Holy Communion, Sacristan, and she loved her job of ironing linens with the altar linen ministry. Vicki was also instrumental in bringing ACTS to Christ the Redeemer. Members have said that if it weren’t for Vicki, ACTS would not have come to CtR when it did. To quote on of her fellow ACTS Sisters, “if she only knew how far her prayers and committed work have brought many men and women into a deeper faith and union with the Church and Christ through ACTS!” Her theme for the first retreat held in 2009 was “My House shall be called a house of prayer.” Matthew 21:13. Her work continues as many men and women attend ACTS retreats at CrR-her Legacy. As a long-time resident of Autumn Leaves of Memorial City, a memory care community, since November 2013, she has been in the great care of many wonderful and loving staff members for whom she will always be remembered lovingly as “Miss Vicki”. Before moving into this community, Vicki loved to travel and shop, and she and Matt spent several vacations cruising the oceans with her sister Cyndy and nephew Nicholas. She loved her two special pals, Buddy and Charlie, the dachshunds. Charlie is now a family member of the Hogue Dachshund clan along with his new brothers Snoopy and Bradley! The Funeral Mass will commence Friday, January 12, 2018 at 12:00 PM at Christ the Redeemer Catholic Church, 11507 Huffmeister Rd. Cypress, TX 77065. A graveside service will be held Saturday January 13, 2018 at 12:00 PM at Holy Cross Cemetery 17501 Nacogdoches Rd. San Antonio, TX 78266. In lieu of flowers, please consider a donation to the Alzheimer’s Association: Houston & Southeast Texas Chapter, 6055 South Loop E, Houston, TX 77087.

Victoria (Vicki) Lynn Rehberg passed away on January 7, 2018 at the age of 65. Born in San Antonio, Texas on March 29, 1952 to Gus and Pauline Rehberg, Victoria is survived by her son, Matthew Rehberg (grandsons Bentley and Maysen), sisters... View Obituary & Service Information

The family of Victoria "Vicki" Lynn Rehberg created this Life Tributes page to make it easy to share your memories.

Send flowers to the Rehberg family.