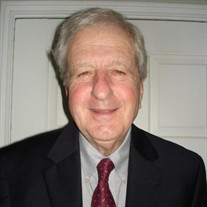 Walter Thome went to the Lord on December 11, 2021. He was 92. Walt was born on April 2, 1929, the fourth of six children, in Toledo, Ohio. He was married to Marie Soulis Thome for nearly 58 years, has four children and nine grandchildren. Walt grew up in Toledo, attending Central Catholic High School and then the University of Dayton, receiving a BS in Business Administration. He later received an MBA from the University of Toledo. Walt spent two years serving in the US Army during the Korean War, where he had Top Secret Q Clearance, supporting the development and storage of nuclear weapons. He spent over 30 years of his professional life working for Owens Corning Fiberglas, retiring as Regional Operations Manager for six states. Work transfers took him to Louisville, Kansas City, Detroit, and finally to Houston, where he resided for 50 years. Walt was an active member of Saint John Vianney Catholic Church throughout his 50 years in Houston. He served as a catechist, a Eucharistic Minister, a Knight of Columbus, and an ACTS brother. He also served as President of the Parish Council, President of the Men’s Club, and Bazaar chairman. He cared for the least among us, giving time for Meals on Wheels, the Prison Ministry, and the Spring Branch mentoring program. He received the Vargo award in 2009, in recognition of his extensive service to the community. Walt enjoyed travel, especially with family, and visited all 50 states as well as 50 foreign countries. He played duplicate bridge most of his life, enjoyed golf, family genealogy, and Bible studies. He founded the Houston chapter of the University of Dayton Alumni association and served as the first president. Walt was a faithful Catholic, husband, father and grandfather and was loved by many. He prioritized his time for Marie, his children and grandchildren, and enjoyed family game nights, Sunday afternoons at the pool, watching sports together, attending children’s activities, coaching youth sports, and leading Boy Scouts programs. His wife, children, and grandchildren always felt secure in his love for them. In his eighties Walt was called to write and publish two books. The first is his own memoirs titled Holding on to the Bar, and is treasured by family members and friends. The second book, YES WE CAN, The Pathway to Vocations, summarizes his independent research into the disparity of vocations to the Catholic priesthood across different dioceses and how Catholic education can help vocations. The book has been endorsed by three bishops. Walt was preceded in death by brothers Dick and Bob and brothers-in-law Bernie Shiple and Bob Eaton. He is survived by sisters Jane Eaton and Mary Ann Roe (husband Bill), brother Bill Thome (wife Joyce), and sister-in-law Eileen Thome. He is also survived by his wife Marie, son Gary Thome (wife Pam), their children Josh, Amanda, Jared, Caleb, and Sarah, son Bryan Thome (wife Renee), their children Caroline White and Nicholas, son Kevin Thome, and daughter Karen Gore and her children Summer and Sterling. Walt was a strong supporter of Catholic education and asks that in lieu of flowers gifts be made to Frassati Catholic High School (Houston) where his grandchildren have attended. Donations may be made in his name at: frassaticatholic.org/give The Thome family will be present to receive friends Thursday, December 16, 2021 from 6:00 PM until 8:00 PM with a Vigil service beginning at 7:00 PM at St. John Vianney Catholic Church, 625 Nottingham Oaks Trail, Houston, TX 77079. A Funeral Mass will be celebrated Friday, December 17, 2021 at 10:30 AM at St. John Vianney Catholic Church. A reception will follow Holy Mass in the Activity Center at St. John Vianney. Mr. Thome will be laid to rest at VA Houston National Cemetery in a private family ceremony. This live streaming link will be available on Friday, December 17, 2021 at 10:30 AM: https://youtu.be/hwlDQ91xuBg

Walter Thome went to the Lord on December 11, 2021. He was 92. Walt was born on April 2, 1929, the fourth of six children, in Toledo, Ohio. He was married to Marie Soulis Thome for nearly 58 years, has four children and nine grandchildren. Walt... View Obituary & Service Information

Send flowers to the Thome family.