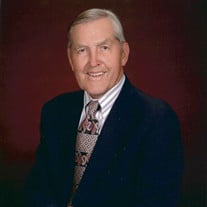 Wilburn Frank (Bill) Albers, 95, died gently on March 17, 2022, under watchful care at his home in Houston, Texas. He is predeceased by his parents, brother Morris, wife Marilyn with whom he enjoyed 60 years of marriage, and grandson Stephen Michael. Bill was born in La Grange, Texas, on July 7, 1926, to Odell and Irene Albers. He grew up on the family farm and graduated from La Grange High School in 1942. Before and upon graduation, Bill worked several jobs earning enough to attend Texas A & M University for 16 months. In July 1944 during World War II, he was assigned to the University of Colorado V-12 Naval Officer Training Program. Providentially, he met the love of his life, Marilyn Dall in the summer of 1945. After the war, he returned to the University of Colorado for his senior year where he played football and earned a BS in Mechanical Engineering. In 1947, he began working on a seismograph crew while continuing his love-letter romance with Marilyn until their marriage, August of 1949. After a year in Louisiana, Bill was transferred to Canada and their first child Margaret was born in Alberta. During the next 5 years in Alberta and Saskatchewan, Carol, Barbara, and Mark joined the family. In 1958, they moved to Jackson, Mississippi, adding Thomas and Mary. Their final move took them to Houston in 1968. In Houston, they joined St. John Vianney Catholic church and Bill served faithfully until the last months of his life. He also served as Assistant Scoutmaster of Troop 598, mentoring and serving countless young men. Bill was the epitome of a godly man, fully devoted to his faith and his family, and leaves behind a legacy for his six children and their spouses; his twenty grandchildren and their spouses; and 37 great-grandchildren. Services will be held Thursday March 31, 2022, with visitation beginning at 5:30 PM and vigil service at 6:30 PM at Dettling Funeral Home, 14094 Memorial Drive, Houston, TX 77079. Funeral Mass will be held the following morning Friday April 1, 2022, 10:30 AM at St. John Vianney Catholic Church, 625 Nottingham Oaks Trail Houston, TX 77079. After Mass Bill will be laid to rest at 3:30 PM at La Grange Cemetery, 1011-1019 East Eblin St. La Grange, TX 78945. In lieu of flowers, donations may be made to your own church or one of his favorite charities: St. Joseph’s Indian School, The Navigators, and the National Arbor Day. Visit www.dettlingfuneral.com to leave words of condolence for the family.

Wilburn Frank (Bill) Albers, 95, died gently on March 17, 2022, under watchful care at his home in Houston, Texas. He is predeceased by his parents, brother Morris, wife Marilyn with whom he enjoyed 60 years of marriage, and grandson Stephen... View Obituary & Service Information

The family of Wilburn "Bill" Frank Albers created this Life Tributes page to make it easy to share your memories.

Send flowers to the Albers family.