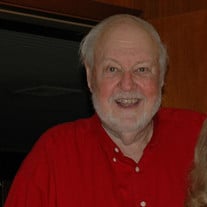 William Joseph “Bill” Bauer 1928-2017 William Joseph “Bill” Bauer passed away on August 3, 2017 in Houston, Texas. He was born to Robert and Mary Bauer on September 11, 1928 in New Castle, Indiana. He grew up in Victoria, Texas with his parents and sister Joan. He attended St. Edward’s University in Austin, Texas and went on to work for the Internal Revenue Service for the entirety of his professional career. He is survived by his wife of 66 years, Joan Bauer; daughter Barbara (husband Michael Barrett); daughter Cathy (husband Michael Horecka), Cathy and Michael’s children Katie Bares (husband Jared) and Kevin Horecka (wife Nipuni Ratnayaka), and Katie and Jared’s children Logan, Zachary, and Maria; and daughter-in-law Paula Bauer, wife of Bill and Joan’s son Bob who predeceased him, and Bob and Paula’s children Nikki Bullock (husband Kyle), Kacey Bauer, Shellie Bauer, and Joni Bauer. Bill was devoted to his church and his family. He and Joan were members of St. Cecelia Catholic Church since 1958. He was active in parish life, the Serra Club, and the St. Vincent de Paul Society. He served in many parish roles including the choir, Eucharistic ministry, and as a lector. A master woodworker, Bill built numerous items for the parish to use for liturgies and the church facilities. Bill loved to build things, from furniture to electronics to construction projects. He could fix anything. He enjoyed building so much that in the late 1960’s he converted his garage to a “saloon” where friends and family would gather to shoot pool and enjoy each other’s company. Photography was also a passion of his; he even had his own darkroom. He enjoyed listening to classical music, reading, and puzzles of all kinds. Bill was active in the Hedwig Village community, where he and Joan lived for 55 years, volunteering for many years as head of the Planning and Zoning Commission. Bill was an intelligent man, well-read, always wanting to learn new things. He really enjoyed talking to people, even strangers, engaging everyone with a story or humorous repartee. He believed in hard work and making the most of one’s talents and abilities, a real do-it-yourself kind of guy. He had a meticulous and inquisitive mind set, ever practical and logical. He was very proud of his family and bragged about them to anyone who would listen. He gave great hugs, sometimes lifting you off your feet. He had a very strong faith, and embraced his belief in eternal life for us all. The Bauer family will be present to receive friends for a visitation Thursday August 10, 2017 from 10:00 AM until 11:00 AM at St. Cecilia Catholic Church at 11720 Joan of Arc, Houston Texas 77024, followed by a Funeral Mass and reception on church grounds. Interment services will follow at Forest Park Westheimer Cemetery 12800 Westheimer Rd, Houston, Texas 77077. Visit www.DettlingFuneral.com to read more and leave words of condolence for the family.

The family of William Joseph "Bill" Bauer created this Life Tributes page to make it easy to share your memories.

Send flowers to the Bauer family.