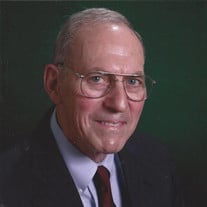 William J. (Jim) Ebanks, Jr., age 84, passed from this life Friday, September 10, 2021 in Houston. Mass will be celebrated on Monday, September 20th at 10:30 am at St. John Vianney Catholic Church in Houston, Texas. Jim was born in Port Arthur, Texas to William J. Ebanks and Doris (Ducote) Ebanks. He married Eleanor (Mengden) Ebanks on June 1st, 1958 and lived a life devoted to her for more than 63 years. He was preceded in death by his eldest son, James D. Ebanks and his parents. Jim attended Lamar High School and Rice University in Houston, Texas where he earned bachelor’s, master’s and doctoral degrees in Geology. While at Rice, among other activities, he was Honor Council Chairman, a member of the swim team, and was named among the “Top Ten Seniors.” Following graduation, he served as Captain in the United States Marine Corps. Throughout his distinguished career, Jim worked for various companies in the oil and gas industry, the Kansas Geological Survey, and the University of Kansas where he occasionally taught graduate level courses. A life-long learner, he loved geology and the study of the earth. He routinely arranged family vacation routes in a manner that would maximize exposure to interesting geologic features or to enable stops to an outcrop to collect rock samples. His career provided him the opportunity to travel the world, and he particularly enjoyed his expatriate assignments with his wife in Jakarta, Indonesia and Caracas, Venezuela. After retiring, Jim and Eleanor settled in Bryan, Texas where he was a Fourth Degree member of the Knights of Columbus at Saint Thomas Aquinas Catholic Church and led his church’s work crews for many years as a volunteer for Habitat for Humanity. He loved his Cayman Island family roots and spent countless hours completing the work his father began in tracing the family’s genealogy. Jim will be remembered as a faithful servant and a humble family man. He cherished his wife, kids, and all his relatives and will be deeply missed. Jim is survived by his wife, Eleanor M. Ebanks, three children and their spouses, Kathleen M. Pearse (Wayne), Theresa L. Wagner (Jim), William S. Ebanks (Annette), his brother, Gerald K. Ebanks (Bulinda), daughter-in-law, Nancy Olson Ebanks, twelve grandchildren, Diana, Erik (Ashley), Laura and Brittany Ebanks, Lisa (Tyson) Russell and Shelly (Eric) Degenhardt, Benjamin, Timothy and Luke Wagner and William, Matthew and Sarah Ebanks, and two great grandchildren, James and Addison Ebanks. A funeral Mass will be held at St. John Vianney Catholic Church at 10:30am on Monday, September 20th, preceded by the Rosary at 10:00am. Following a reception at the Church, a private rite of committal will occur at Forest Park Cemetery. Funeral arrangements are under the direction of Dettling Funeral Home. The family would like to thank the caregivers at Parkway Place, Hospice Plus, and Life Enhancers, particularly Antoinette Huggan, for their loving, compassionate care during Jim’s extended illness. In lieu of flowers, the family requests that memorial donations be made to the Parkinson’s Foundation, Habitat for Humanity, or a charity of your choice.

The family of William James Ebanks Jr. created this Life Tributes page to make it easy to share your memories.

Send flowers to the Ebanks family.