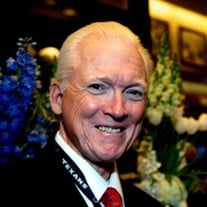 William (Bill) C. Fisk, Jr. passed away on September 12, 2021, at the age of 71 after a lengthy, valiant battle with cancer. Born in Dallas, Texas, he is the son of the late William C. Fisk, Sr. and Elizabeth Cates Freund of Richmond, Texas. He was preceded in death by his father and his brother, Weldon Fisk. He is survived by his beloved wife, Becky Virtue; children, Amy Moore and her husband, Brandon of Beaumont, Texas; Emily Fisk of Spring, Texas; grandchildren, Cole Harrison of Austin, Texas, and Jake Harrison of Plano, Texas; siblings Charles Fisk and his wife Sherry of Rosenberg, Texas; Margie Fisk of Emory, Texas; sister-in-law, Linda Fisk, of Richmond, Texas, and several nieces and nephews. Bill graduated from Lamar Consolidated High School in 1970 in Rosenberg, Texas. He worked for Exxon for over 20 years. Some of Bill’s best times were spent country and western dancing, fishing, deer hunting, attending Houston Texans football games, and traveling, especially enjoying his vacation home in Cloudcroft, New Mexico. After retiring to The B &B Last Resort in the Texas Hill Country, he enjoyed sitting on the back porch feeding and watching the native wildlife, particularly the deer and hummingbirds. He was a gifted gardener who transformed his Hill County property into a beautiful and peaceful retreat. Bill was a loving husband, father, son, brother, grandpa, and friend. He was a generous and giving man who always made sure those around him were taken care of. He was always there to lend a helping hand. Bill was such a character and was often known for being silly with everyone who knew him and even those who didn’t. Visitation will be held on Friday, September 17, at 5:00 pm for family and from 6:00pm--8:00 pm for family and friends at Dettling Funeral Home, 14094 Memorial Drive, Houston, Texas 77079. A private burial service for the family will be held prior to Celebration of Life services. Celebration of Life will be held on Saturday, September 18, at 11:00 am in the chapel at Memorial Drive Presbyterian Church, 11612 Memorial Drive, Houston, Texas 77024. Contributions may be made to Memorial Drive Presbyterian Church or to the American Cancer Society, Richard M. Schulze Family Foundation Hope Lodge – Houston, Texas, in memory of Bill Fisk.

William (Bill) C. Fisk, Jr. passed away on September 12, 2021, at the age of 71 after a lengthy, valiant battle with cancer. Born in Dallas, Texas, he is the son of the late William C. Fisk, Sr. and Elizabeth Cates Freund of Richmond, Texas.... View Obituary & Service Information

The family of William (Bill) C. Fisk Jr. created this Life Tributes page to make it easy to share your memories.

Send flowers to the Fisk family.