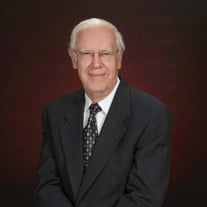 William Joseph Heilman, PhD, 88, of Houston passed away Thursday, September 6, 2018. Dr. Heilman was born August 31, 1930 in Pittsburgh, PA to William Joseph Heilman, Sr. and Marcella Hauck Heilman. Bill is survived by his wife of 61 years, Charlotte Andrews Heilman; children, Terry Heilman, Christine Heilman, Eric Heilman & wife Janet; granddaughters, Reagan, Paige and Grayson Heilman; sister-in-law, Gerry Stein & husband Wayne; brother-in-law, Paul Andrews & wife Dolly as well as numerous nieces, nephews and extended family. Bill grew up in the Pittsburgh area attending Millvale High School. After high school Bill attended the University of Pittsburgh where he earned his BS in Chemistry, and Syracuse University earning his Master of Science in Chemistry. Dr. Heilman graduated from Texas Tech University in 1962 with the distinguished honor of Doctor of Philosophy in Organic Chemistry. Bill went on to a long prestigious career as a Polymer Chemist in the oil and gas industry working for Gulf Oil, Pennzoil, Chevron and Shell. Bill held over 300 patents and was the recipient of multiple Achievement Awards from the American Chemical Society. He met and married the love of his life, Charlotte in 1957. Bill’s career ultimately relocated the family to Houston where they raised their family and remained until today. Bill was a kind, patient, soft spoken man who loved his family and truly enjoyed being with them. He was a longtime member of St. John Vianney Catholic Church. He was loved by those who knew him and will be greatly missed. The Heilman family will be present to receive friends Thursday, September 13, 2018 from 6:00 until 8:00 PM with the Holy Rosary being recited at 7 PM at Dettling Funeral Home, 14094 Memorial Dr., Houston, TX 77079. The Funeral Mass will commence Friday, September 14, 2018 at 10:30 AM at St. John Vianney Catholic Church, 625 Nottingham Oaks Trail, Houston, TX 77079. A reception will follow Holy Mass on the church campus. In lieu of flowers please consider contributions in Bill’s memory to the Alzheimer’s Foundation at www.alz.org .

The family of William Joseph Heilman, PhD created this Life Tributes page to make it easy to share your memories.

Send flowers to the Heilman, family.