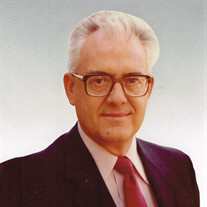 William Charles Miller, 92, passed away on July 23, 2021, at his home in Houston, Texas. Bill was born October 7, 1928, in Santa Ana, Calif., son of Clarence Raymond Miller and Margaret Henke Miller. He grew up in Midway City and Huntington Beach, Calif. where he met his future wife Barbara Miller at Huntington Beach High School. He graduated with distinction from Stanford University, earning a B.S. degree in petroleum engineering and elected to Tau Beta Pi. While at Stanford he played trumpet in the Stanford Band and designed marching band half-time shows. He was also a member of the Theta Chi fraternity and enjoyed lifelong friendships with his fraternity brothers. He married Barbara and joined Shell Oil Company in 1950. Soon after, he served two years in the Army and taught at the Engineers School at Fort Belvoir, Va. At Shell he worked on many challenging projects in the U.S. and overseas, including California, the Four Corners area, the Netherlands and Texas. He admired and enjoyed working with the high caliber of engineering talent at Shell. As a Distinguished Lecturer for the Society of Petroleum Engineers (SPE), he traveled to address meetings of engineers in Asia, Australia, South America and throughout the United States. After retiring from Shell, he continued working as a Reservoir Engineering Consultant. He authored many technical papers and was an ongoing member of SPE. Bill was a soccer coach, Little League coach, loving husband, father, grandfather and great-grandfather. He was always a member of the church choir no matter where his family was living. He greatly enjoyed following Stanford University sports teams, World Cup Soccer and the America’s Cup. Along with Barbara, he was a great supporter of his grandchildren's activities, recitals and sports events. He was an avid reader and a lover of all things musical including the Houston Symphony, the Gilbert and Sullivan Society of Houston and the Houston Grand Opera. He was a member of St. Martin’s Episcopal Church and the Phi Beta Kappa Alumni Association of Greater Houston. He is survived by his wife of 70 years, Barbara F. Miller; his daughters, Camille Powell and Amy Williams; his sons, Dane Miller and Douglas Miller; his grandchildren Emily Fox, Sarah Gesell, Margaret Powell, Drew Miller, Lauren Stuart, Matthew Williams, Allison Williams, Julia Miller and Colin Miller; and 3 great-grandchildren. He was pre-deceased by his parents and his brothers, Robert S. Miller and John F. Miller. A private service will be held at St. Martin’s Episcopal Church.

William Charles Miller, 92, passed away on July 23, 2021, at his home in Houston, Texas. Bill was born October 7, 1928, in Santa Ana, Calif., son of Clarence Raymond Miller and Margaret Henke Miller. He grew up in Midway City and Huntington... View Obituary & Service Information

The family of William Charles Miller created this Life Tributes page to make it easy to share your memories.

Send flowers to the Miller family.