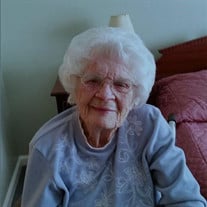 Helen Southwood Sappenfield passed away on January 14, 2017 at the age of 99, 3 weeks short of her 100th birthday at Buckner Parkway Place nursing home in Houston, Texas. Helen was born in Sullivan, Indiana on February 4, 1917. In the early 1940s she moved to Washington, D.C. where she met and married Keith Sappenfield of Lyons, Indiana on March 7, 1947. Helen and Keith settled in Kensington, Maryland where she practiced as a registered nurse at Georgetown University Hospital until she and Keith both retired in 1970s. Helen and Keith together had four children: Keith (Poleteme of Detroit, MI living in Houston, Texas), Eric (Mary of Corpus Christi, Texas living in Waco, Texas), Susan (Harry Coon of Barth, FL) and Lynellyn of Kensington, MD. Helen is survived by her four children, five grandchildren, seven great-grandchildren and two great-great-grandchildren. Helen was predeceased by husband, Keith, one grand son, Jacob Reed, and her brothers and sisters; Oma Collins, Lois McMickle, Olan “Gene”, Shirel, Issac and Bob Southwood. She was a member of the Kensington Baptist Church while in living in Kensington, Maryland and after returning to Sullivan, Indiana was a parishioner at the First Christian Church on N Broad Street. She was also a member of the Order of Eastern Star of Indiana for over 75 years. She enjoyed reading, painting, and visiting with her family. The family would like to thank the staff of Harbor Care unit at Buckner Parkway Place for their tender loving care of our mother. Graveside memorial service next to her husband, Keith, is planned for Sullivan, Indiana in the Spring of 2017. To honor Helen’s memory, the family suggests a donation to a pet charity or the donor’s favorite charity in her name. “When someone you love becomes a memory, the memory becomes a treasure.” – Author Unknown.

Helen Southwood Sappenfield passed away on January 14, 2017 at the age of 99, 3 weeks short of her 100th birthday at Buckner Parkway Place nursing home in Houston, Texas. Helen was born in Sullivan, Indiana on February 4, 1917. In the early... View Obituary & Service Information

The family of Helen Virginia Sappenfield created this Life Tributes page to make it easy to share your memories.

Helen Southwood Sappenfield passed away on January 14, 2017 at...

Send flowers to the Sappenfield family.