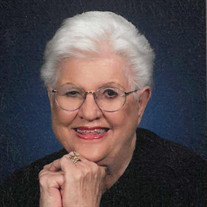 A true star was born on January 8, 1934. Margaret Raye Ayers passed away on May 19, 2020. After a lengthy and courageous battle with cancer. Raye was the first of a set of identical twins born to Sam and Elsie Wilson. During her high school years at Duncanville High, she played basketball. This was the start of her successful Basketball career. While in high school, Raye was named to the Texas All State High School Basketball team in 1951 and again in 1952. Later, she was inducted into the Duncanville High School Hall of Honor. After graduation, she was one of the few females to be recruited for women's sports at the time. Wayland Baptist College with the infamous "Flying Queens" came calling. In her four years of college, she set many records. Upon Raye’s arrival in 1953, the Flying queens set off on a feat yet to be broken. She and her teammates went on to set a record that still holds today for the most consecutive wins of any amateur in sports team history. They won an astounding 131 consecutive games and four national championships. Raye was chosen to the all American team in 1955 and 1956. She and her twin sister, Faye, who joined her at Wayland Baptist went on to be inducted into the Wayland Baptist Hall of Fame in 2007. Raye and Faye, also known as the “Twins”,were women trailblazers and set the tone for all future women in sports. Raye and her teammates were inducted into the National Women's Basketball Hall of Fame as "Trailblazers of the Game" in Knoxville, Tennessee in 2013. On September 9th 2019, she and her fellow teammates were enshrined into the Naismith Basketball Hall of Fame as well. After college, she flew as a stewardess for Continental Airlines. In 1958, she met the man of her dreams and married Leland Rex Ayers. They went on to have two sons, Samuel Rex Ayers and Shawn Wilson Ayers.They had a wonderful marriage.They lived in many places in the US and traveled abroad. Finally, they settled in Houston to raise their family. She was preceded in death by her beloved husband of 54 years, Leland “Rex” Ayers and her loving son, Shawn Wilson Ayers. She is survived by her son, Sam, and daughters-in-law ,Claudia Ayers and Missy Deck; four grandchildren whom she cherished and adored, Grant, Ashley, Hudson and Logan; her beloved and cherished twin sister, Faye Wilson Gould and her older sister, Martha Anne Yeager. Close to her heart are nephews, David and Bobby Ayers and her beloved nieces, Linda Fisher, Cindy Calhoun, Julie Creel, and Jenifer Gould as well as many friends and neighbors. A new star now shines in heaven and will be much missed by all that knew her. Raye’s life will be celebrated at a small graveside ceremony in Dallas, Texas. In lieu of flowers, please consider a donation to your local girl’s youth sports organization or a charity of your choice.

A true star was born on January 8, 1934. Margaret Raye Ayers passed away on May 19, 2020. After a lengthy and courageous battle with cancer. Raye was the first of a set of identical twins born to Sam and Elsie Wilson. During her high school... View Obituary & Service Information

The family of Margaret Raye Ayers created this Life Tributes page to make it easy to share your memories.

Send flowers to the Ayers family.